This Is How Candidates Cheat Personality Tests 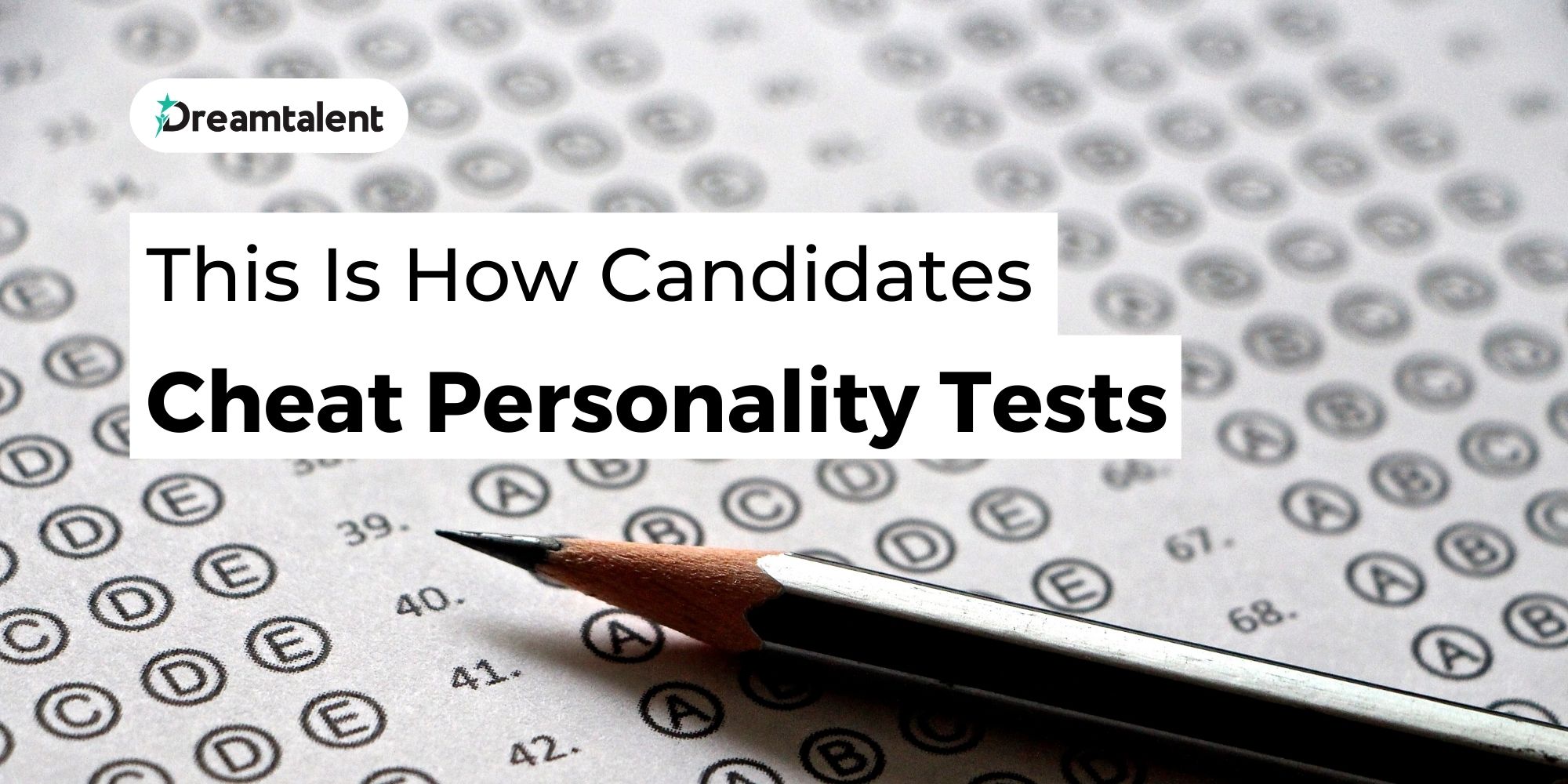 How do you measure if someone is narcissistic? Researchers have developed a test that comprises only one question:

Surprisingly, this single-question test is quite effective. Narcissists aren’t afraid to show that they are narcissistic, so the answers are accurate.

But things aren’t that simple with personality tests in recruitment.

As many as 78% of job applicants lie in the hiring process. This includes trying to game personality assessments to try and show themselves as better than they actually are, and impress the recruiters grading their answers. It all comes down to trying their best getting that interview and job offer.

However, faking in personality tests isn’t only bad for the recruiters. It’s also self-sabotage for the candidates themselves, since it only leads to lack of job and culture fit where neither would be happy.

So how could candidates “cheat” in personality assessments, and what can recruiters do about it?

Reasons behind faking in personality tests

The job is on the line

Looking for a job is never easy and the COVID-19 pandemic is only making things harder for job seekers. It’s understandable when you want to do everything it takes to impress the recruiter and land the interview, including answering less-than-truthfully in personality assessments.

This is known as perceived high stakes that involves serious risk or loss in case of failure — in this case a source of income. Rather than seeing the personality test as a way to see if this job would be the right fit for them, it’s treated as an obstacle that needs to be won at all costs. Hence, candidates try to pick the answers that would make them look “good”, rather than who they really are.

The Hawthorne effect was a popular case study originally to find out if better lighting could make factory workers more productive. The workers did become more productive, but not because of the new lights, but because they worked harder knowing they were being watched.

Though there are lots of doubts revolving around this study, the Hawthorne effect is nonetheless a useful anecdote showing how our behavior can change under observation.

Candidates, who are taking personality tests knowing they are being observed and graded by recruiters, feel the same thing.

The pressure of being watched adds to the already high stakes of competing for the job offer. This drives candidates to try and get the highest score possible, while personality tests are actually about the right fit, not the highest numbers.

There are many ways a candidate could fake answers in a personality test. Here are some of the biased response styles recruiters should look out for.

Candidates would tend to over-report (exaggerate) themselves when the question is about their positive aspects. For example, if the question asks “I like helping others” they would answer Yes, even if they really don’t, just because they think that’s the answer that recruiters are looking for.

On the other hand, they tend to under-report (play down) negative behavior, e.g. “I never lie” and answering No. This is because such behaviors are socially undesirable especially to the recruiter.

This kind of dishonest answering would give recruiters an inaccurate reading on their true personality, which jeopardizes job and culture fit for both the company and the candidate.

Impression management is the tendency to give an inflated self image to look good in front of an audience. This is done by controlling what information about themselves is given out, including their answers in a personality test.

Unlike SDR, impression management seeks not only to be socially acceptable, but to create the most positive image possible of the self.

Candidates with high impression management would only show off their strengths while completely omitting their weaknesses, in order to look better than they really are in front of the recruiter. The end result would be a highly inflated, highly bloated reading on the candidate’s personality and fit, while in reality they are nowhere near the image they’ve crafted.

Interestingly, candidates with too low impression management would not want to be seen at all. They tend to not only omit their negative aspects, but also not want to mention any of their strengths. This makes it difficult for recruiters to gauge their true personality fit with the job and culture.

Similar to the previous two, self-deceptive enhancement is the tendency for someone to see themselves as better than they really are. What makes it different is that it’s unconscious. Rather than to impress others, this aims to increase one’s own self esteem.

It’s a type of motivational strategy to make someone feel good about themselves, especially if there’s a threat to self esteem, such as the risk of losing the job to other candidates. In order to avoid that threat, they unconsciously perceive themselves in a more favorable but biased light.

So, while they answer the personality tests honestly, those answers are already biased without them realizing it.

On one side, they may be biased positively and inflated to be better than they really are. On the other side, due to lack of self esteem, they refuse to acknowledge their own strengths and end up selling themselves short on the personality test.

Acquiescence: tendency to answer Yes and agreeing to every question.

How can recruiters address biased responding?

The bad news is no personality test is 100% foolproof, even if administered under supervision. This is because they are self-reporting assessments which contain risk of bias on the part of the candidate, conscious or not.

We acknowledge this challenge that recruiters are facing in assessment and recruitment. The good news is, there are measures that we can take to reduce the likelihood of biased responses and encourage candidates to answer honestly, so that both candidates and recruiters can find the right fit for each other.

For example, instead of asking “I’m ready to help others” the question should be written like “You’re broke, but your friend asks to borrow some cash”. This feels more like an everyday scenario rather than a test, so it’s easier to answer honestly as if you were really in that situation.

Another advantage of the semantic differential scale is that it obscures what personality aspect is actually being measured.

At Dreamtalent, we take this one step further by introducing a lightweight and gamified UI for our personality assessments. Besides improving candidate experience during the assessment, they add to the immersion.

We incorporate elements such as selecting a book cover that interests you most, picking which social media post you would make, and more. The end result is more of a game and less than a test. All these elements work together to reduce the stakes of the personality test, and combined with the obscuring of the question’ true object of measurement, immerses candidates taking the assessment and encourages the submission of honest answers, so that recruiters can learn the true job and culture fit of candidates when hiring.